Tarkjel Landsverk was born in Seljord, Telemark, Norway, October 18, 1859, the son of Halvor Landsverk and Margit Gunnarsdotter Rugtveit. Landsverk studied to be a teacher in Kviteseid, Norway, for three years before emigrating to America with his parents in 1884. The family settled in Highland Prairie, near Rushford, Minnesota. In 1897 he purchased his first piece of land and in 1898 married Helga Oian. They farmed for the remainder of their lives although Landsverk also served as a parochial school teacher in Norwegian in area schools from 1886-1907. They were the parents of four children, Margit, Ole, Gunhild, and Halvor. Landsverk died in 1945. According to Landsverk’s son, Ole, "It was in the arts that father’s interest was centered." Raised in a family that was skilled in hand-crafts, Landsverk enjoyed painting, carpentry and woodcarving as well as playing music and writing poetry. He also worked in stone creating, besides the Pioneer Memorial at Luther College, the bandstand in the Highland Prairie Church Park and a memorial to the early pioneers who settled in the area. Landsverk also functioned as an advisor when an amphitheatre was build in the church park. Ole Landsverk noted that his father had "slight acquaintance" with masonry when he came to America. However, he became skillful as a plasterer and could shape limestone blocks and build rock walls. Ostensibly he was self-taught. Marion Nelson, Director Emeritus of the Norwegian-American Museum in Decorah, IA, wrote that the Landsverk family, starting with Tarkjel Landsverk, "is remarkable not only because of the amount, breadth, and quality of its art work but because it found its public and patrons primarily in its own community." Tarkjel and his descendants were notable for carving wood, painting and working with textiles. Nelson wrote that they represent, "not only the products of a few gifted individuals but the artistic tastes of an entire rural Norwegian-American area in southeastern Minnesota." Ref: Nelson, Marion. Three Landsverks: the Art of an Immigrant Family. Decorah, IA: Vesterheim Production, 1990. Odden, Phillip. "Kubbestol: From Seating To Symbol." Vesterheim. 6 (Fall 2008), 43-49. John Christianson, Professor Emeritus of History at Luther College, wrote a short history of the Pioneer Memorial for the rededication of the Memorial in 1997. He noted that the centennial of President Laur. Larsen’s birth (first Luther College President) was celebrated at Homecoming in October, 1933. The alumni commemorated the occasion by commissioning the Laur. Larsen Memorial which was designed and built by Tarkjel Landsverk, completed in 1934. The Memorial was located at the Leif Erickson street entrance to the campus. In 1936, the college celebrated its 75th anniversary (Diamond Jubilee) with a series of events. During Homecoming of that year, the redesigned and expanded monument, incorporating the Laur. Larsen Memorial and now called the Pioneer Memorial, was dedicated. The commission for the expanded Memorial was also awarded to Landsverk. Rev. Kristian Magelssen, long-time pastor at Highland Prairie, was intimately familiar with Landsverk’s stone artistry and urged the planning committee to hire Landsverk to design and build the Memorial. His son, Nils Magelssen, LC ’03, who also served as a pastor at Highland Prairie, was a member of the Memorial Committee. Prof. Sigurd Reque, LC ’03, researched and wrote the texts of the nine bronze plaques which are incorporated into the Memorial wall. Landsverk selected a Decorah area stone to face the memorial called "honeycomb limestone" which is pock-marked on one side. The memorial is composed of a ten-foot high rectangular block which stands at the front. It contains two bronze plaques, one with a relief bust of Laur. Larsen and the other, a plaque containing information about Larsen, both set in a granite boulder embedded in the block. Behind the block is a concrete pulpit shaped in the form of a tree trunk, round with an open back. It is constructed of stones set into concrete to resemble the bark on a stump. Behind the stump/pulpit is a 70 foot wall with 9 bronze plaques set into the stones. The wall, made of stone and concrete, is 33" high at its lowest point and 9’3" high at its highest point. The Pioneer Memorial has been used in many ways since it was dedicated. Open-air worship services have been celebrated there, especially during Nordic Fest (July) and Founder’s Day (October). Commemorative events have been held there. It has served as the logo for college campaigns including, since 1978, the Heritage Club. Members of student organizations frequently pose there for annual group photographs. The Pioneer Memorial was renovated in two phases during the summers of 1995 and 1997. The renovation was initiated by the Collections Committee at Luther College. Funding was provided by the Luther College Museum Restricted Fund, the President’s Office, Preus Library and Larsen family donations. Consultants for the project were the Upper Midwest Conservation Association and Save Outdoor Sculpture! (National Institute for the Conservation of Cultural Property). Principal contractor was Ted Wilson, Decorah stone artisan, assisted by several individuals including Luther College student assistants and staff. Renovation included power-washing the entire memorial to remove pollutants and lichens, tuck-pointing old mortar, replacing broken stones, capping the wall to prevent water saturation, rebuilding stone walkways and stairs, and modifying landscape plantings to improve air circulation and visibility. The Pioneer Memorial was added to the Inventory of American Sculpture, National Museum of American Art, Smithsonian Institution, in 1994. It also has been reviewed by the Save Outdoor Sculpture representatives from Iowa State University, College of Design, and added to their inventory. 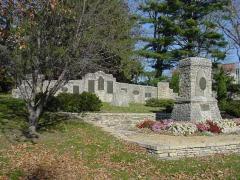