William Auerbach-Levy was born in Brest-Litovsk, Russia, in 1889. His parents added the surname Levy to Auerbach after immigrating to the United States in 1894. He won an art scholarship to study in Paris and attended the Julian Academy on a two-year fellowship. After his return to New York, Auerbach-Levy taught life drawing and etching at the Educational Alliance Art School and the National Academy School of Fine Arts. William Auerbach-Levy died at the age of 75 on June 29, 1964, in Ossining, New York. His wife, Florence Von Wien, co-author of one of his books, preceded him in death in 1957. Auerbach-Levy was known for his genre paintings, portraits, etchings and caricatures. He exhibited widely and won numerous awards, including a Guggenheim Fellowship in 1929. His art works are in many nationally known museum and library collections including the Art Institute of Chicago, the Boston Museum of Fine Arts, the New York Public Library and the Library of Congress. Auerbach-Levy also authored several books about the art of caricature. He was well-known for his caricatures of prominent personalities that appeared in magazines such as The New Yorker, Vanity Fair and American Heritage. His illustrations also appeared in books and newspapers. He particularly enjoyed the theatre, which provided a great source for caricaturing celebrities. In 1932, he created an etching of George Washington’s courtship for the United States George Washington Bicentennial Commission. Miscellaneous articles, exhibit catalogs and documents chronicling his life are part of the Manuscript Collections of the Archives of American Art in Washington, D.C. 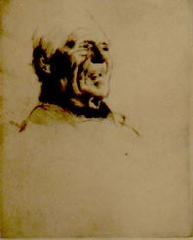