Douglas Weaver was born in 1923 in Elkhart, Indiana. In 1930, he moved to San Diego, California. He was privately tutored in art by the Hollywood studio artist, Lucy Roberts Evans. During World War II he served in the Army’s Timberwolf Division as a combat engineer. After the war, he attended Woodbury College in Los Angeles as an art major. He left college in 1947 to take his first position in a commercial art studio. In 1970, Weaver made the transition from commercial to fine arts. He specialized in painting, with themes about the west, researching his ideas to authenticate details. In 1998, Weaver was commissioned by the State of New Mexico to create a wall mural in oil for the Don Juan de Onate Center, the Headquarters of the New Mexico National Guard in Santa Fe. The occasion was the Four Hundredth Anniversary of the entrance into this territory by the first European colonists. Weaver’s art has been in numerous exhibitions mostly concentrated in the southwest. His paintings are in the collections of the State of New Mexico, the Rio Grande Historical Collections (New Mexico State University), as well as the private collections of former President Ronald Reagan, and former governor of California, Pete Wilson. Publications featuring Weaver’s art include Southern New Mexico Magazine, the American Buffalo Journal, and Artists of Southern California. Weaver has said of his art: “Trying to find the true story and interpreting it on canvas or paper is my real kick in western art. Whether the subject is a great moment in history or just a lone unidentified cowboy doing his (to him) dull job, I want to know what life was really like then…and I think there are others that do, too.” The painting of Nino Cochise in the Fine Arts Collection was donated to Luther College in 1992 by Don and Virginia Hastings making it a part of the Hastings Collection of western art. Nino Cochise was the last Apache war chief. Cochise was supposedly 101 years old when this portrait was painted. 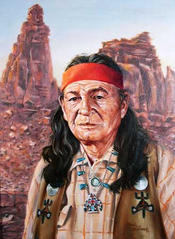