Josef Engelhart was born in Vienna, Austria, August 19, 1864. He was a painter and sculptor who studied at the art academies in Vienna and Munich. He traveled to Spain and Italy and spent a considerable amount of time in Paris. Engelhart died in Vienna, December 19, 1941. Engelhart was a co-founder of the Vienna Secession, an avant-garde group of artists who broke away from the official art academies. They hosted exhibitions, which introduced Europe to new artistic movements and artists in the late 19th and early 20th centuries. Engelhart was included in an exhibit catalog featuring Secession works in 1909. Engelhart was known for painting scenes and characters drawn from Viennese everyday life. Well-known sculptures, which he created are the Waldmüller monument and the Borromäus fountain, both in Vienna. Engelhart’s autobiography was published in 1943, two years after his death. A biography, written by Walter Obermaier, was published in 1991. In 1918, a book written by Friedrich Wichtl about the causes of World War I, was published which featured a cover picture created by Engelhart. An art calendar of saints, published in 1925-26, contained pictures “nach Gemälden” of Engelhart. 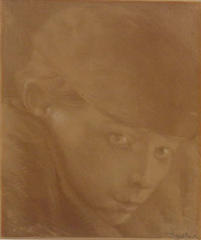