Allan d’Arcangelo was born June 16, 1930, in Buffalo, New York. He was educated at the University of Buffalo where he received a degree in History in 1953. He also studied at the City College of New York, the New School for Social Research, and Mexico City College, which he attended for two years from 1957-59. d’Arcangelo taught at a number of institutions including Brooklyn College (1973-1992), the School of Visual Arts in New York City (1963-1968), Cornell University, and the Institute of Humanistic Studies in Aspen, CO. He received numerous mural commissions, both public and private. He is especially known for his paintings of highways and road signs, which he began in 1963. His work of the 1960s and 1970s is most commonly associated with the Pop Art movement. For instance, one of his most famous prints of a Gulf Oil Company Sign hanging moonlike over a highway was reproduced as a full-page image in The New Yorker in Late December of 1998. The Luther Fine Arts Collection contains this specific print titled June Moon. Eventually his work moved further away from the comically-inspired Pop aesthetic, towards more tough and abstract form. d’Arcangelo was included in significant group exhibits in the 1960s including shows at the Museum of Modern Art, the Oakland (CA) Museum, the Institute for Contemporary Art in London, and the Albright-Knox Museum in Buffalo. His first solo show was at the Fischbach Gallery in New York in 1963, followed by numerous solo shows both in the United States and in Europe. d’Archangelo’s work can be found in the Museum of Modern Art, the Guggenheim Museum, the Brooklyn Museum, the Detroit Institute of Arts, and the Walker Art Center. He received a National Institute of Arts and Letters Award in 1970. d’Arcangelo died December 17, 1998, in New York City. 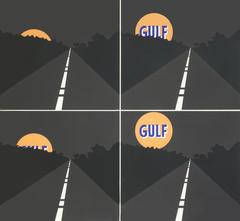