Carl Emil Zoir was born October 28, 1861, in Göteborg (Gothenberg) Sweden. He was a painter, drawer, and graphic artist. His parents were Johannes Karlson and Johanna Andersson. He was married in 1894 to the artist Hildegard Zoir, nee Rygård. Zoir died April 11, 1936, in Göteborg. He studied at the Technical School in his hometown until 1880. In the early 1880's, he spent time in England followed by the United States where he studied for several years at the Institute of Fine Arts in Boston, MA. Zoir then studied at the Ecole des Beaux-Arts in Paris (1890-94), after which he again traveled to the United States (1894-95). He then returned to Paris for two years, but continued to travel. He spent time in France, Italy, Germany, as well as his home country of Sweden. In 1907, he settled in Göteborg, but continued to travel internationally. His international exhibitions included: World Exhibition in Liege in 1905; 'Biennials' in Benedig in 1905, 1907, and 1909; Paris Salon in 1907; Secession Exhibition in Munich in 1908; "Espozione Internazionale' in Rome in 1911; First International Graphic Art Exhibition in Leipzig in 1914; and The Baltic Exhibition in Malmö in 1914. At the Galeries d'Allard in Paris (in 1911) he had a solo exhibition which featured 116 works, primarily oil paintings and etchings. Zoir also exhibited in the United States at the Brooklyn Art Museum in 1916 and at the Anderson Galleries in New York in 1929. 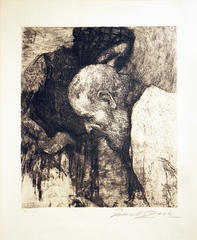