Sigvald Asbjørnsen was born in Christiania (Oslo), Norway on October 19, 1867. He studied art with B. Bergslieu, Mathias Skeibrok and Middelthun in Norway. At the age of 16, he was awarded a stipend from King Oscar II to study at the Royal Academy in Oslo where he worked for five years. He immigrated to the United States in 1892, working first in Michigan where he received several important commissions for sculpture. He eventually moved to Chicago, where he worked on the buildings for the World Columbian Exposition of 1893. Asbjørnsen spent the remainder of his professional career in Chicago, where he sculpted a number of public works that were sent to various localities in the United States. Asbjørnsen exhibited sculptures at the Art Institute of Chicago between 1897 and 1921. His sculptural work was also shown at the University of Minnesota exhibit, "The Divided Heart: Scandinavian Immigrant Artists, 1850-1950" in 1982. He received the St. Olaf medal in 1952 from Norway’s King Haakon VII. In the later years of his life, Asbjørnsen turned to painting pastel winter and summer landscapes. Asbjørnsen married Norwegian Margaretha Stuhr and had three children. He died in 1954. Asbjørnsen was primarily known as a sculptor. Some of his well-known commissions include the Leif Erikson statue in Humboldt Park (1901), Chicago; Louis Joliet for the Public Library in Joliet, IL; and War and Soldiers’ Statue for the Sherman Monument, Washington, D.C. (1903). He sculpted American statesmen including the John R. Monaghan Monument, Spokane, WA; Wilber Fisk Sanders Statue, Helene, MT; and the Hon. Robert William Moore Statue, Memphis, TN. He also crafted bronze busts including Benjamin Franklin, Theodore Roosevelt, Edwin Westgaard and John Anderson. He made medallions of Bjørnstjerne Bjørnson, Ibsen, Grieg, and others. His sculptured relief bust of Roald Amundsen faces the Pacific Ocean in Golden Gate Park, San Francisco, CA. 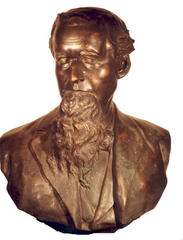