Bror Julius Olsson Nordfeldt was born in Tullstorp, Malmöhus, Sweden, on April 13, 1878, the son of Nels and Ingrid (Nordfeldt) Olsson. In 1891, the family emigrated to Chicago, IL, when he was 14 years old. He adopted his mother’s surname after arriving in the U.S. Beginning in 1896, he studied at the Art Institute of Chicago while working as a typesetter on a Swedish newspaper, Hemlandet. He studied with both John H. Vanderpool and Frederick Richardson at the Art Institute. In 1900, Nordfeldt traveled to Paris to study at the Academie Julian. In 1901, he began to study woodblock printing with F. Morley Fletcher in Oxford, England. Shortly after this experience, he returned to Sweden to live and paint in Jonstorp, a village on the western coast. Between 1903 and 1907, Nordfeldt lived in Chicago, depicting Chicago landmarks, people and scenes in many of his compositions. After 1907, he moved to other places including Massachusetts and New York where he continued to work. He married Margaret Dolittle in 1909 and by 1911 they had returned to Chicago. He had several exhibitions at the Swedish Club House there including a display of his painting "The Giadocco Canal." The Fine Arts Collection etching of similar title is dated 1935-1937. Nordfeldt spent 1913 in Paris, returning to New York after the start of World War I. During the war, Nordfeldt was assigned to San Francisco to supervise the camouflage of merchant ships while his wife, a physician, worked for the War Department. After the war, he moved to Santa Fe where he settled for a number of years. He taught art and continued to submit works for exhibitions in Chicago and on the east coast. During the 1930’s he moved often settling in Utah, Kansas, Colorado, and Massachusetts at various times. In 1937, he moved to Lambertville, NJ, where he lived until the end of his life. By 1944, Nordfeldt was remarried to Emily Abbott. He died in Henderson, Texas, April 21, 1955. Nordfeldt exhibited in numerous museums and galleries and received many significant awards and prizes in the course of his career. His works were held in the Art Institute of Chicago, the New York Public Library, Museum of New Mexico, Metropolitan Museum of Art, Newberry Library, and the Hirshhorn Museum as well as many other venues. Biographical sketches for Nordfeld are published in most standard art reference works.His papers are held in the Manuscript Collections of the Archives of American Art. The etching "Giudecca Canal" by Nordfeldt in the Fine Arts Collection was donated to Luther College by the family of Nils E. Remmen in 1941. It is a signed artist’s proof which was acquired from Albert Roullier, importer of engravings and etchings, in Chicago. 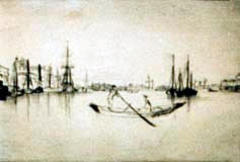