Robert Maggiani was born in 1935 in France. He was introduced to painting in 1947-48. From 1958-66 he was a pupil of painter Jean Bertholle. Maggiani has been interested in the study of the role of art and the artist in society and has been devoted to the cause of social programs for artists in France. From 1984 to 1987, he was the president of the French Commission for Professional Artists. Maggiani became known during the 1960s when his work was exhibited in youth culture houses (state supported art and culture clubs) in Paris. In 1966 his paintings were displayed at an exposition in Montmonrency Gallery in Paris. At this time he was influenced by the poet Yves Bonnefoy, painter G.L. Roux and sculptor-painter Giacometti, subsequently drifting away from the ideas of Bertholle. Maggiani’s paintings from 1967-1970 were characterized by new forms of realism. In 1970 a fire in his Paris studio destroyed most of his work. This event motivated Maggiani to change his philosophy of art. Leaving realism behind, he pursued a new form of painting, discovering what he calls the “cold light” of Brittany, France. Light and color became more important in his work. Maggiani became an artist-member of the Gallery Jacob on the Left Bank in Paris in 1976. After that time, his work became increasingly well-known in Europe. In 1978, Maggiani visited the United States where he was influenced by his experiences, especially viewing the paintings of the artist Mark Rothko. Maggiani returned to the United States in the early 1980s to work and study. In 1988, he exhibited his paintings and became an artist-in-residence at Luther College. At the conclusion of his visit, the College purchased his painting, Table Service. Maggiani returned to Luther in 1990 to again be an artist-in-residence as well as visit classes, hold open studio sessions, lecture and take part in panel discussions. Maggiani is recognized as a significant artist in the United States and Europe. His paintings have been purchased by France’s National Foundation for Contemporary Art and his work has been featured at expositions in Caen and Paris as well as in California, Atlanta, and New York. 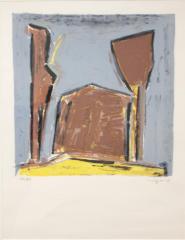