Charles Crodel (16 September 1894 - November 11, 1973) was a German artist and painter of stained glass has also taught at Penn State University and the University of Louisville. He was a member of the Berlin Secession Born in Marseille, he studied art at the University of Jena, including painting and lithography. He was a member of the executive council Jenaer Kunstvereins, the famous Bauhaus forum. It was a close friend of Gerhard Marcks. In 1923, the German National Gallery of Art in Berlin and, later, the National Library in Paris, they buy prints and lithographs. Murals at the University of Jena, another in the Schlossmuseum Weimar and Erfurt to remain a third of that time. From 1927 to 1933, teaches Crodel printing and monumental painting at the "Burg Giebichenstein", Academy of Arts and Crafts in Halle. All murals include those who were devoted to Goethe (1932) Bad Lauchstädt were destroyed in summer 1933 and 1936. Many refugees have washed away paintings and engravings of Crodel. They are now visible in Louisville, North Carolina Museum of Art, Raleigh, Virginia Museum of Arts and at Luther College in Decorah. In subsequent years, has experienced Crodel found new areas of work. He practices in the decorative glass industry (in collaboration with Wilhelm Wagenfeld), and explores the decoration of pottery with Hedwig Bollhagen. He begins the technique of stained glass and mosaic. In 1945, teaches Crodel back to Halle, but also in Berlin and Dresden, and in 1951 at the Academy of Fine Arts in Munich. Since 1958, Crodel is regularly invited to the Penn State University and the University of Louisville. You can see the windows of Crodel in Germany and Sweden, including Frankfurt, Berlin, Erfurt and Hamburg. Returning from a meeting of the Academy of Arts in Berlin, Crodel died in 1973 in Munich. 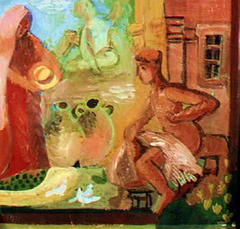