A portrait and religious-subject painter and etcher from Belgium who spent much of his career in England, Anthony Van Dyck was born in Antwerp. His talent was recognized early, as he signed his first portrait in 1616 when he was seventeen years old. He became the favorite student and studio assistant to Peter Paul Rubens, and learned to imitate his style to the point that there was confusion as to which man painted some of the portraits. When he was twenty-one, in 1620, Van Dyck first went to England to do court portraits, but was there for a short time because he never got the introduction he sought from King James I. So he spent most of the next seven years in Genoa, where he did religious subject paintings and studied work of the Italian masters, especially Titian. In 1627, he went back to Antwerp, and continued doing religious paintings as well as portraits, reportedly being charming in a way that brought many commissions. He also did a series of etchings, described as "brilliant psychological portraits of contemporary poets and artists." As he matured and developed his own style, he did paintings that became more moderate in color and style. In 1632, at age 33, he returned to England, invited by King Charles I who had heard of his distinguished reputation in Belgium and appointed him Court Painter. Excepting brief visits to France and Belgium, Van Dyck stayed there the remainder of his life, which was nine years, completing over 350 portraits. "These distinguished portraits of an elegant and almost unreal court became the model for later English portrait painters of the seventeenth and eighteenth centuries and influenced a vast number of European artists including Gainsborough, Watteau, and Renoir." (barewalls.com) He was knighted so that his titled became Sir Anthony Van Dyck, and earned a considerable pension. He married the daughter of Lord Ruthven and was relatively leisurely in his last years, applying finishing touches to paintings but not completing the entire works. He died in London and was buried in St. Paul's Cathedral. There is one work by Van Dyck in the Luther Fine Arts Collection. 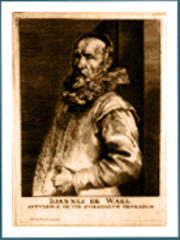