Samuel Johnson Woolf, 1880, was born in New York City in 1880. He studied with Kenyon Cox and George de Forest Brush at the Art Students League and National Academy of Design, both in New York City. Woolf was a frontline artist-correspondent for Time Magazine in Europe with the American Army during World War One, painting portraits of General John C. Pershing, commanding general of the U.S. forces, and General Joffre, of the French. He died in 1948 in New York. Woolf was employed at the New York Times before going to Time. From 1924-1935, Woolf produced two hundred charcoal portraits for Time Magazine, including those of Charles Lindbergh, Walter P. Chrysler, John L. Lewis (United Mine Workers President), and Pope Pius XI. Woolf executed a pencil portrait of President Calvin Coolidge, in 1923, and a lithographic portrait of President Franklin Delano Roosevelt during World War II. In 1906, Woolf painted a portrait of Mark Twain, then seventy years old. Upon completion, the portrait was exhibited at the Society of American Artists, but Twain didn't like it. The painting is now in the collection of the Mark Twain House, Hartford, Connecticut. It was essentially forgotten until Mrs. Stiles Burpee conducted a search for it, based on finding a color lithograph of the portrait in her attic. Well-known art collector Thomas B. Clarke had purchased it for the collection of the Brook Club. Woolf exhibited at the Metropolitan Museum of Art, National Academy of Design, and New York Public Library, all in New York City; the University of Michigan, Ann Arbor; Carnegie Institute, Pittsburgh, Pennsylvania; Pennsylvania Academy of the Fine Arts, Philadelphia; and the Corcoran Gallery, Washington, D.C. Woolf's awards include the St. Louis Exposition, 1904; Hallgarten Prize, National Academy of Design, 1904; Appalachian Exposition, 1910; and the Paris Salon Medal, France, 1937. There is one piece by Woolf in the Fine Arts Collection, a graphite portrait of Mark Twain. 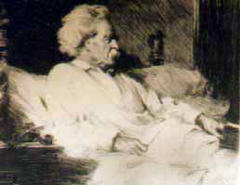