Baron Felician Myrbach-Rheinfeld was born in Zalesciki, Ukraine, on February 19, 1853. He was a painter, illustrator, and graphic artist during his career. Myrbach taught drawing at the cadet school in Vienna while he was completing his studies at the Vienna Academy. In 1881, he traveled to Paris to become an illustrator. He returned to Vienna in 1897. Myrbach was a Professor of Illustration at the Vienna School of Arts and Crafts during the years 1899-1905. During his life, he also lived in Paris from 1905-1914, in Barcelona from 1914-1915, and 1917-1922 near Bilbao. He died in Klagenfurt, Austria, January 14, 1940. Myrbach illustrated numerous books including Alphonse Daudet’s Wives of Men of Genius, published in New York by Worthington Company in 1889. His signature is clear on many of the illustrations in the book, especially on p. 59. The lithograph by Myrbach in the Fine Arts Collection was donated to the College by the family of Nils E. Remmen in 1941 and so is part of the Remmen Collection. 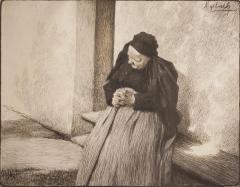