Erling Enger was born in Fåberg, Norway, May 17, 1899. He was married to Aud Stockfleth in 1927. He died February 12, 1990 in Oslo, Norway.. Enger was educated at Ås Agricultural University, 1921-24, where he studied forestry and became a forester. In 1927, at the age of 29, he decided to study art instead and moved to Oslo. He had loved drawing since he was a child. Enger began his studies at Statens Håndverks og Kunstindustriskole. Since his wife was employed, he decided to continue his art studies and attended the Academy of Art (Statens Kunstakademi) where he became a student of Axel Revold. He was influenced by Rolf Nesch, and worked with other Norwegian painters who were inspired by German Expressionists He made his debut in 1931. After four years of education, he began to teach drawing, feeling he needed to be employed for the sake of his family. In 1939, when his daughter was born, he decided to become a full-time artist. This decision sent him into a depression. He struggled all his life to justify his choice: "Was the life of an artist really proper work?" He never rid himself of doubt concerning this issue. Most of his paintings are motifs from farms, flowers and woods. In the late 1930’s, he coped with illness and adversity, but continued painting and exhibiting his work. His paintings have a humorous side. Some of his models are almost caricatures. Enger was considered a humorist in Norwegian art. Love of nature is the main topic in his work, especially themes of winter, dark woods, snowy fields, or fall after the leaves have fallen. Many of the scenes in his works were inspired by the hills and lakes in and around Enebakk,, where he had a cottage in the countryside near Oslo. Enger received scholarships and made study tours to Germany, the Netherlands, France, England, Italy and other countries. His paintings have been purchased by art galleries and museums in Oslo, Gøteborg, Copenhagen, Reykavik, Stockholm and America. 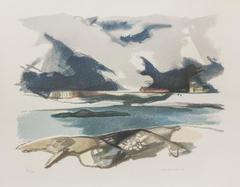