Frank Huntington Stack (aka Foolbert Sturgeon) was born on October 31,1937, in Houston, TX. He received a B.F.A. from the University of Texas and an M.F.A. from the University of Wyoming. He pursued post-graduate study in Chicago, New York and Paris, before joining the faculty at the University of Missouri in 1963, where he taught for the next forty years. In 2003, Stack retired to create art fulltime. Stack has taken two different tracks with his art. He was an early and influential force in the development of underground comics and graphic novels, working under the name Foolbert Sturgeon. In 1962, he self-published The Adventures of Jesus, considered by many to be the first underground comic book. He has contributed comics to several anthologies, including Zero Zero, Snarf, Blab!, and Rip Off Comix. He also contributed introductory comic material to the V.T. Alley Oop collections and National Lampoon. He collaborated with writer Harvey Pekar on American Splendor comics. Stack’s drawings for that work were featured in a film, also titled American Splender, that was nominated for an academy award in 2003. He and Pekar had previously collaborated on the graphic novel, Our Cancer Year, which won the Harvey Award for best graphic album of original work in 1995. While pursuing his work in comics, Stack also developed a reputation as a painter and printmaker. His art draws heavily on art historical references, but is almost always developed from observation, whether that be working directly from a model or creating plein-air landscapes. He has said that early in his career, while working as a graphic artist, he realized, “I guess I'd really rather be Toulouse-Lautrec [. . .] to be able to go out with my sketchbook and interpret the life I had seen." Stack’s work has been exhibited internationally through shows in New York, Los Angeles, Paris, Italy, Poland, Turkey, Korea and China. His art can be found in galleries in the United States, Europe and Asia. He has been an artist in residence at Appalachian State University (NC), Shepard College (WV), and Virginia Polytechnic University. His several research fellowships have allowed him to study in the United States and abroad. He has published two monographs on his work and his art has been featured in American Artist, The Artist's Magazine and The Village Voice. 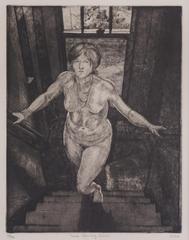