Svend Rasmussen Svendsen was born March 21, 1864, in Nittedal, Norway, son of Rasmus and Marie Svendsen. Shortly after his birth, his parents moved to Oslo. He received his early schooling in Norway, although left school to work at the age of twelve. In 1881, he immigrated to the United States, settling in Chicago, IL. He married May Isabel Newton in 1890, with whom he had five children. Svendsen was erroneously reported to have died in 1930 and short obituaries for him appeared in various publications. His career declined due to alcoholism and other difficulties. Svendsen passed away in Chicago on September 6, 1945. Svendsen was a self-taught painter who enjoyed visiting the National Gallery and Blomquist’s gallery in Oslo before moving to America. He studied with Fritz Thaulow, a well-known city and landscape painter, in Norway. At the Académie Delécluse in Paris, Svendsen studied with Edward F. Ertz in 1896. Svendsen is well-known for his rural scenes, marine views, and snow scenes in Norway. His paintings were purchased by a number of Norwegian and American private collectors including Joseph Jefferson, Edward B. Butler and Clarence Darrow. Works by Svendsen are actively sold through contemporary art auctions. Svendsen exhibited frequently at the Chicago Art Institute between 1895 and 1920, exhibiting oil and watercolor paintings as well as pastels. He won the Young Fortnightly prize in 1895 awarded by the Chicago Art Institute. He also received an honorable mention for one of his works at the Nashville Exposition of 1897 and a bronze medal at the St. Louis Exposition of 1904. He exhibited in solo shows at the W. Scott Thurber Galleries in Chicago between 1897 and 1903. Additionally, Svendsen exhibited at the National Academy of Design annual in 1902 and the Pennsylvania Academy of Fine Arts annual, 1898-1900 and 1902. In 1913, his name appeared on the register of the Chicago art dealer O.R. Kellogg. Svendsen also exhibited at the Chicago Norske Klub in 1920. One of his paintings was shown at the Norse-American Centennial Art Exhibition at the Minnesota State Fair in 1925. His works were included in the exhibition, "Scandinavian Paintings in Northfield" in 1980. Two of his paintings were in an exhibition at the University of Minnesota in 1982 titled "The Divided Heart: Scandinavian Immigrant Artists, 1850-1950." Works by Svendsen were also part of the "Norway in America" exhibition in Norway in 1989 and part of the exhibition, "The Friedman Collection: Artists of Chicago," in spring 2002 held (Spanierman Gallery, Chicago). 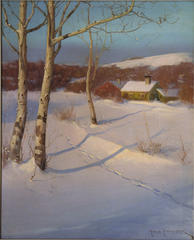