Abram (Abraham) Krol was born January 22, 1919, in Pabianice (Lodz), Poland. Krol went to France in 1938 to study civil engineering at the University of Caen. In 1939 at the beginning of World War II he joined the Foreign Legion. After he was demobilized, he became a mechanic in a garage in Avignon. Although Jewish, he survived the war with a false identity. In 1943, Krol started studying to be an artist, taking courses in sculpture at the city’s School of Fine Art. He also began studying painting and self-described himself as a “Sunday painter.” Krol moved to Paris in 1944. The first exhibition of his work was in 1946 in the Katia Granoff Gallery in Paris. After the war, Krol took up engraving, studying that art form with an engraver he met in Paris. Krol reflected his Hasidic childhood often using Biblical themes in his art works. He said, During all my years of childhood I had read the Bible endlessly. I came back to the Bible because I was on solid ground there. It was part of the assertion of my own truth after a time of complacency. It seemed to me that in painting or engraving there were so many reefs to avoid, so many possibilities of setback, that I had to have all the odds in my favor do what I could—say what I had to say. Krol illustrated over 20 literary works from the late 1940s through the 1960s. He also engraved medals for the Paris mint and painted murals for schools in France. He designed tapestries and painted approximately 200 enamels. Museums and libraries which own Krol’s art works include the Bibliotheque Nationale in Paris; the Victoria and Albert Museum in London; the British Museum; Houghton Library, Harvard; Bodleian Library, Oxford, and the Palace of the Legion of Honor in San Francisco. Krol has had numerous one-man shows throughout Europe, Brazil, and in California. In 1960, Krol was invited to the Venice Biennale. He was awarded the Critics Prize in 1958. He also won the Feneon Prize among other honors. Krol died on October 9, 2001. 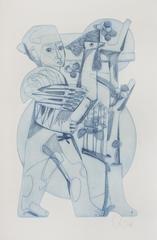