Peter Nielsen was born in Denmark on April 10, 1873. He emigrated to the U.S. as a young adult at the age of 14 and settled first in Chicago, IL. He studied briefly at the Art Institute of Chicago but is considered mostly a self-taught artist. By the 1920s, he had moved to California where he settled in the Los Angeles area. He remained in California until his death in Santa Ana, CA, October 24, 1965. Nielsen exhibited frequently at the Art Institute of Chicago, starting in 1898 and ending in 1920. From that time on, he began to exhibit in California in venues including the Pasadena Art Institute (1928), California State Fair (1936), and the Golden Gate International Exposition (1939). He also exhibited at the California Art Club (1926), Painters & Sculptors of Southern California (1925, 1930, 1937), Academy of Western Painters (1936 & 1937), Scandinavian-American Art Society of the West (1939) and the All California Exhibition (1939). He was a member of the Palette & Chisel Club of Chicago. His paintings are held at the Gardena, CA, High School, the Oakland Museum, and the Los Angeles County Museum of Art. He also painted murals, sometimes in collaboration with other artists, one of which is owned by the Biltmore Hotel in Los Angeles, CA. Paintings by Neilsen have most recently been exhibited at the Downey Museum of Art in Downey, CA (1989) and in 1998 at an exhibit entitled "Painted Light: California Impressionist Paintings from the Gardena High School, Los Angeles Unified School District Collection" which was held at California State University, Dominguez Hills University Art Gallery and the Irvine Museum. The landscape painting by Nielsen in the Fine Arts Collection was donated to Luther College by the family of Dr. Nils E. Remmen in 1941. It was misidentified for many years but ultimately the identification of the artist was corrected by Dr. Marion Nelson, Emeritus Director of the Norwegian-American Museum in Decorah, in October 1999. 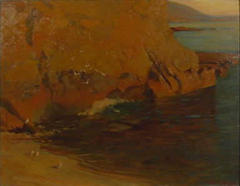