Mark Sabin was born in New York City in 1936 and raised in Florida. After graduation from Columbia University Law School in 1961, serving in the U.S. Navy, and writing several screenplays and novels, he worked in the entertainment industry. As an artist, Sabin was described as a fantasy painter, blending elements in a juxtaposition that surprises the audience. Sabin’s paintings are in various collections including the Museum of American Folk Art in New York City. His lithographs have been distributed by TransworldArt, Inc., founded by Alex Rosenberg in 1968. His works have appeared on magazine covers, record jackets, and brochures such as Bloomingdale’s 1978 Christmas brochure. 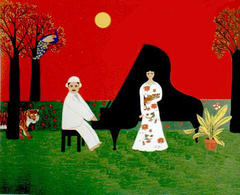