Keith Achepohl was born April 11, 1934, in Chicago, IL. He graduated from Knox College in Galesburg, IL and earned a MFA in printmaking from the University of Iowa where he studied with Mauricio Lasansky. He holds DFA degrees from Knox College (1996) and Pacific Lutheran University (1989). Achepohl served as a printmaking instructor at the University of Iowa from 1964-1967. He returned to the school in 1973, as professor and head of the printmaking department. In 2001, the University named him the Elizabeth M. Stanley Professor in the Arts. Works by Achepohl can be found in more than 80 museum, institutional, and corporate collections around the world, including the National Gallery of Art & Pennell Collection, Library of Congress, Washington, DC; the Los Angeles County Museum, CA; the Art Institute of Chicago; the Biblioteca Nacional, Madrid, Spain; and the Kobe Art Museum, Kobe, Japan. His extensive exhibition list includes the National Print Exhibition, Library of Congress (1960, 61, 63 & 69); the Brooklyn Museum (1968-74); the Utah Museum of Fine Arts (1980); the Art Institute of Chicago (1981); Honolulu Academy Art Exhibition, Japan (1990); Egyptian National Museum (1990); Gonzaga University (1996); Western Illinois University (1997); Washburn University (1997); the Davenport Art Museum, IA (1998); and Percival Gallery, Des Moines, IA (1997). In 1966, he received a Tiffany Foundation Award, and has twice been the recipient of Fulbright Senior Lectureship Awards, first to Cairo, Egypt (1979-80) and then to Ankara, Turkey (1984). In 1982 he won the Gold Medal for Printmaking at the Mediterranean Biennale, Alexandria, Egypt, and in 1990 received the Edmondson Award from the Des Moines Art Center. Achepohl is known primarily for his watercolors and prints. Much of his work is informed by extensive travels in the Mediterranean region, in particular Egypt and Turkey. His watercolor series, Egypt Day and Night, abstracts the geometry of the region’s architecture and infuses it with sensuous color. Other works reflect his interest in nature through the sensitive depiction and interpretation of plant forms. 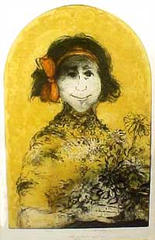