Lars Jonson Haukaness was born in Granvin, Hardanger Fjord, Norway, in 1862. He studied with the Norwegian painters, Erik Werenskiold, Christian Krohg and Fritz Thaulow at the Bergslien studio in Christiania (Oslo), after arriving there in 1882. He participated in several exhibitions in Oslo from 1884-1886. After emigrating to America in 1888, he eventually settled in Chicago in 1893. There he became immersed in the Norwegian community where he was a designer and painter for the Chicago World Exposition and worked as a house painter. In 1902, he moved to Madison, WI, where he made his living as a portrait and landscape painter. By 1907 he had settled in Spring Grove, MN, where he had some success painting portraits. He returned to Norway in 1909 but traveled back to America in 1913. Haukaness came to Canada around 1919 where he held an exhibit in 1920 in Winnipeg. He continued to live in Winnipeg, teaching at the art school there from 1921-1924. He moved to Calgary in 1926 where he taught classes at the Calgary Art Club (now Alberta College of Art) and exhibited at the Paint and Arts Store. He died September 4, 1929, after suffering a heart attack near Lake Louise. On September 7, 1985, a memorial service for Haukaness was conducted in the Banff Cemetery. A bronze bas-relief showing Haukaness, his pack pony and dog, was unveiled and mounted on a large rock at his grave. The bas-relief had been cast in plaster in 1931 by a student of Haukaness’, Euphemia McNaught. In 1985, it was cast in bronze for the gravesite. A plaque outlining his career was set in the ground in front of the stone. Works by Haukaness were exhibited widely in the U.S. and Canada. He exhibited works at the Chicago Institute of Art in 1901 and 1902. A one-man show of his works was exhibited by Young’s Galleries in Chicago, IL, in 1913. The same show moved to Minneapolis, MN, where it was exhibited at the Radisson Hotel in the fall of 1913. Works by Haukaness were exhibited at the Norse-American Centennial Art Exhibition held at the Minnesota State Fair in 1925. The Chicago Norske Klub exhibited paintings by Haukaness from 1921 through 1927 and purchased works by him for the club permanent collection. A Memorial Exhibition of his works was held at the Calgary Exhibition and Stampede Grounds in July 1931. In 1980, works by Haukaness were shown at the exhibition "Scandinavian Paintings in Northfield," sponsored by St. Olaf College. The University of Minnesota displayed his works in 1982 at the exhibit, "The Divided Heart: Scandinavian Immigrant Artists, 1850-1950." In 1991, the Edmonton Art Gallery held a one-man show entitled, "Lars Haukaness: Northern Vision." Works by Haukaness belong to several art museums including the Minneapolis Institute of Art. The painting by Haukaness in the Fine Arts Collection is a portrait of Thrond Bothne painted in 1916. Provenance for the painting is unknown although it appears on early inventories for the Collection. It has been placed on the "Catalogue of American Portraits" administered by the National Portrait Gallery. It also has been added to the "Inventory of American Paintings" at the National Museum of American Art, Smithsonian Institution. Haukaness was interested in Norwegian textile design and was known to have drawn patterns based on traditional designs for weavings. This portrait shows such a weaving in the background. 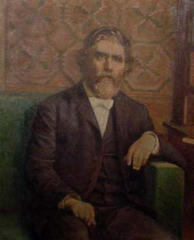