Gilbert P. Risvold (Riswold) was born in Baltic, SD, on January 23, 1881. He was a pupil of Ada Caldwell, instructor of art at South Dakota State University, with whom he studied until he went on to the Chicago Art Institute. There he studied sculpture with Lorado Taft and Charles Mulligan. He lived much of his life in the Chicago, IL, area moving to California in the 1930’s. His sculptures were exhibited at the Art Institute of Chicago between 1909 and 1920 while he was a resident of the area. He died in Hollywood, CA, on March 15, 1938. Risvold’s well-known sculptures include a statue of Stephen A. Douglass in Springfield, IL, and the Mormon Battalion Memorial in Salt Lake City, UT. He also created a sculpture of Abraham Lincoln for the Lincoln Memorial Library at South Dakota State University in Brookings, SD, and the Mother Sherrard Memorial in the capitol building at Pierre, SD. He created the Oak Park and River Forest Memorial (World War I) in Chicago and a memorial to the 145th Utah Artillery as well as a statue of Governor Frank Steunenberg in Boise, ID. He is also known for a portrait bust of Lucille Palmer, a California composer, which has been referred to as "The Quizzical Madonna" or a "Modern Mona Lisa." The sculpture by Risvold in the Fine Arts Collection is a bust of Herman Amberg Preus. cast in bronze in 1925. The sculpture is located in the main floor entry of Preus Library at Luther College. Dr. J.A.O. Preus, a descendant of Herman Preus, recalled that family members watched the sculptor making the bust when they attended Homecoming at Luther College in 1924. The sculpture was stored out of sight for many years but later rediscovered and placed in the Preus Library when it was completed in 1969. (Preus Library is named for the Preus family.) The bust was originally donated to Luther College by the various congregations which Herman Preus had served during his years as a pastor. The sculpture has been placed on the Inventory of American Sculpture maintained by the National Museum of American Art, Smithsonian Institution. 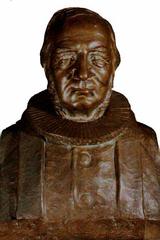