William Kohl was born in St. Louis, Missouri in 1938. He graduated with a BFA, MA, and MFA from the University of Michigan in Ann Arbor in 1964. He taught at Kansas City Art Institute from 1964 to 1966 and then at the University of Iowa from 1966 to 1970. Kohl worked primarily as a sculptor, and was commissioned for his work with various institutions including two Bronze Sculptures for the University of Michigan (1966, 1968), a Steel Landscape Sculpture for Concordia College (1969), a Bronze Sculpture for the University of Iowa- Oakdale Campus (1969), a Bronze Fountain for the David Gallery in Houston, Texas (1969), a Bronze Sculpture for the Cedar Rapids Art Center (1970), and a Bronze Fountain for the First National Bank of Iowa City (1970). Kohl’s artwork has been exhibited in an array of venues including the St. Louis City Art Museum (1960), Detroit Institute of Art (1963), Kansas City Art Institute (1965), Des Moines Art Center (1968), Rochester Art Center (1970), and the University of Iowa Museum (1970). His work is also included in several permanent collections including the Cedar Rapids Art Center (1969), Fairfield Art Center (1970), and Nasson College in Maine (1970). The piece by Kohl in the Fine Arts Collection was produced in 1966. Entitled The Moon at 7:00 p.m., the drawing was initially created as a study for a sculpture. Kohl also exhibited his work at Luther College in November of 1970. Of this show, he said: All of the pieces in this show… represent my development of concepts relation to monumental architectonic oriented sculpture. The material used range from cast bronze, aluminum, and core-ten steel combined with fabricated elements of the same media. Most of the sculpture presented is based upon either suspended tension systems or cantilevered structured elements. 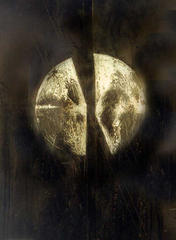