Alfred Sessler was born in Milwaukee, WI, on January 14, 1909. After studying at the Layton School of Art in Milwaukee, he graduated from Milwaukee State Teacher’s College in 1944. In 1945, Sessler earned his master’s degree from the University of Wisconsin (Madison) and joined the Art Department as an instructor. In 1956 Sessler became a full professor at the University of Wisconsin. He died on September 16, 1963. Sessler was employed by the Treasury Art Project from 1935 to 1937 and by the Federal Art Project from 1937 to 1942. He created murals in U.S. Post Offices in Lowell, MI, and Morris, MN as a member of these project teams. Sessler was an active exhibitor who often sent his prints to competitions and print shows. From 1931, when he had his first one-man show at Milwaukee State Teacher’s college, until his death in 1963, Sessler exhibited in numerous invitationals and national exhibitions, receiving many purchase awards. Sessler’s works have been represented in institutions such as the Art Institute of Chicago, the Metropolitan Museum of Art, and the Library of Congress. Although Sessler’s early works of the 1930’s were in painting and drawing, he became well-known for his lithographs, etchings, and woodcuts. He was inspired by images of Milwaukee day laborers and produced many caricatures of faces and figures. A former student remembers Sessler as a dedicated and caring teacher who promoted printmaking in his studio classes. Sessler is known as the inventor of the color reduction process for creating woodcuts.

The Prints of Alfred Sessler from 1935 to 1963. Madison, WI: Wisconsin Academy of Sciences, Arts and Letters, 1988; Who Was Who in American Art, 1985 and 1999; American Prints in the Library of Congress: A Catalog of the Collection. Baltimore: Johns Hopkins Press, 1970; American Printmakers 1880-1945: An Index to Reproductions and Biocritical Information. Metuchen, NJ: The Scarecrow Press, 1993; Archives of American Art, Smithsonian Institution, Supplement 1981-1984; http://archives.library.wisc.edu/oral/guide/set50.htm Oral History Guide Entries, University of Wisconsin, Stein, Karen Sessler (1935-) 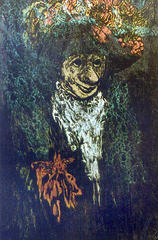