Arnold Ness Klagstad was born in Marinette, WI, July 14, 1898. His father, August Klagstad, had emigrated from Bingen, Modum, Norway, in 1871. He was an established painter. Arnold joined him in his studio during the 1920’s where he learned the basic principles of painting, especially as applied to altar paintings and portraits. He was intermittently involved in the family’s business during much of his life. He died in May, 1954. During World War I, Klagstad was a radio operator in the U.S. Navy. He later studied to become an electrician at the Dunwoody Institute in Minneapolis, MN. By 1923, Klagstad had a work accepted for exhibition at the Minneapolis Institute of Arts. Later he studied at its school of arts where he studied under Morris Davidson and David Angarola. In 1931, he attended the Fontainebleau School of Art in Paris, studying with Gaston Balande, Andre Strauss and Jean Despujols. He became a specialist in cityscapes and was especially drawn to the image of grain elevators in his works. He was a member of the Minnesota Artists Association, of which he was a founder, and the Artists Union. Klagstad exhibited at the Minnesota State Fair at the Norse-American Centennial Art Exhibition in 1925 and in 1932-1934 where he was a prize winner. He also exhibited in the annual exhibitions of the Minneapolis Institute of Arts in 1923, 1925, 1929 and 1931-1939. In 1940-41, his works were shown at the St. Paul Gallery and School of Arts. Klagstad worked with the federal funded art programs of the 1930’s and 1940’s and, when those programs ended, continued painting for the University of Minnesota to paint the campus as it was then. While one of his works was purchased by the Metropolitan Museum of Art in New York City (Industrial Landscape, 1937), it was deaccessioned in 1991 and sold by Sotheby’s. Works by Klagstad were shown in the exhibit "Paintings by Minnesotans of Norwegian Background, 1870-1970" sponsored by the Minnesota Historical Society at the James J. Hill House in St. Paul, MN, 2000. 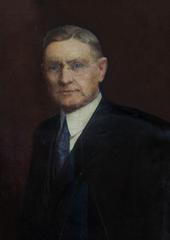