Ernest F. deSoto was born in 1923 in Tucson, Arizona. He studied at the Chouinard Art Institute in Los Angeles from 1942 until 1947 with instructors such as Jean Charlot and Richard Haines. After finishing military service, he continued studying in Mexico from 1948-1949. During this time he learned the art of fresco painting and using new mediums then available for both mural and easel painting. He studied art at Columbia University and attended the University of Guadalajara. He earned a BFA degree from the University of Illinois in 1961. According to the VRMA website, deSoto printed lithographs for the Contemporaries Gallery in New York and taught for a period at the University of Illinois. In 1965, he received a grant from the Ford Foundation to work at the Tamarind Institute in Los Angeles for two years. After this two-year apprenticeship, he was awarded the title of Master Printer. Text on the website indicates he was the first Hispanic to achieve this honor. In 1967, deSoto became the co-founder of the Collectors Press Lithography Workshop. He remained with this group until he founded his own shop, the Ernest F. deSoto Workshop, located in San Francisco. The deSoto Workshop, originally founded as Editions Press, specializes in contemporary Latin American and American lithographs, fine prints and etchings. Art works from the Workshop are exhibited in galleries and art centers. deSoto has exhibited in a broad array of galleries and art museums. He has received prizes for his art and his works are represented in the permanent collections of a number of museums of art. deSoto exhibited two prints in the Fine Arts Festival which ran from April 13-20, 1958. The woodcut, "Plant Forms," received a purchase award and was acquired for the Fine Arts Collection while the lithograph "Resting Figure," was exhibited but not purchased. 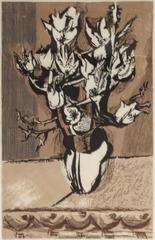