Bio: Born in Japan, Noriko has spent most of her life in Alberta, Canada. Her simple aesthetics are informed by her Japanese-Canadian upbringing. She aims to create aesthetically clean, unobtrusive objects that blend perfectly into their function and can be used without thinking. This is not to say that she doesn't have a sense of humour when it comes to her work. She likes to break up the simplicity with quirky pieces that she hopes can bring a smile to the user. Her path to ceramics has had a few detours. She earned a BA in Classics (Latin and Ancient Greek) from the University of Calgary and had a career as a Registered Dental Technologist for nearly ten years until she chose to make a career change and travel to Stoke-on-Trent to study ceramic design at Staffordshire University, from which she received an MA in March 2013. While in the heart of the UK pottery industry, she started to take a greater interest in the harmonising and combining of craft and industrial ceramics. She is now back in Canada as Residency Coordinator at Medalta International Artists In Residence in Medicine Hat, Alberta, where she also has a studio. Statement: My simple aesthetics have always been informed by my Japanese-Canadian upbringing. My training in England added another layer of influence to my designs, but also changed my making process and my views on mass production considerably. I no longer see manufacturing as lower in value than, or the enemy of, handcrafted work, but only as a different form of making. After all, poor design and craftsmanship can be found anywhere, both in the ceramic industry and in the world of craft and one-of-a kind studio ceramics. In my current practice, I attempt to find that line between craft and industry; to make pieces that fit neither, or rather, fit both worlds; to create designs that are aesthetically clean, considered, and so unobtrusive that they blend perfectly into their function and can be used without thinking. 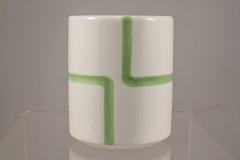