Born in Lafayette, Indiana in 1949, Beth Lo received her MFA from the University of Montana in 1974. She began serving as Professor of Ceramics there in 1985, and was honored with the University of Montana Provost’s Distinguished Lecturer Award in 2006 and 2010. Beth's ceramic and mixed media artwork draws from themes of childhood, family, and Asian culture and language. Her work has been exhibited internationally. Lo has received numerous honors including the United States Artists Hoi Fellowship in 2009. Beth and her sister, author Ginnie Lo, have collaborated on two children’s picture books, Auntie Yang’s Great Soybean Picnic (2012) and Mahjong All Day Long (2005). She has also collaborated with her mother, Chinese brush painter Kiahsuang Shen Lo. Beth is active as a bass player and vocalist for several musical ensembles including The Big Sky Mudflaps, Canta Brasil, Western Union, and Salsa Loca. 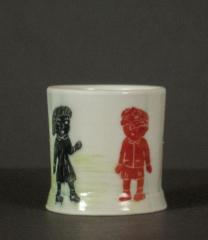